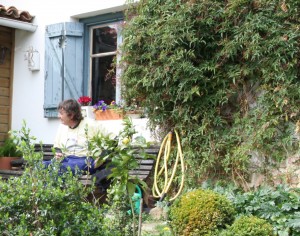 Javier Valverde (San Sebastian, 1956) has painted all his life. Self-taught, he grew up immersed in the arts, surrounded by painting, literature and music. When he was a child his family often stayed in Ayalde for long periods of time, where his father had his home-studio in Oiartzun. His father, Antonio Valverde was also a painter and Ayalde was often the meeting place for many artists who were friends of his father.

In 1979 Javier Valverde won Gipuzkoa’s ‘New Artist’ Prize. By then he had met through his sister, the artist Rosa Valverde, the group of painters including Vicente Ameztoy, Ramón Zuriarrain, Jose Luis Zumeta, Juan Luis Goenaga…

Motivated by these encounters, their influences and his artistic background, he decided to follow the path of a painter, that being a painter would be his way of life and he would never abandon it.

It was then that he took refuge in Oiartzun, first in Ayalde, the family house, and later moving to Maimotz, to a little farm house up in the mountains.

Valverde lives surrounded by beautiful countryside, deep in nature and always aware of what’s going on around him, noticing if there are new blossoms on the trees or if yesterday’s storm has taken down any of the mountain’s precious beech trees…

By measuring the natural world around him through his singular poetic vision he finally manages to produce his painted images containing touches of surrealism.

He continues to live and work in his house and studio in Oiartzun, near the village, on top of a little hill, facing the valley, towards ‘Peñas de Aya’, the mysterious rocky mountains that accompany him.